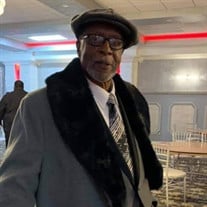 In Loving Memory Of: Edward Hill Jr. whose earthly journey began March 1st 1942 in Uniontown Alabama to the late Edward Hill Sr. and Della King who both preceded him in death. He confessed hope and Christ at an early age and joined Beulah Baptist Church. He was educated in the Tuscaloosa AL school system. He graduated from Druid High School in 1960. He excelled in upholstery and woodworking and was very good with his hands. While in wood shop he built his mother a china cabinet and cedar chest which he was very proud of. He was very active in the civil right movement he participated in sit-in, marching and fighting for the equality for people of color. As a Young Man Edward met and married Frances Witherspoon, to this union six children were born. They relocated to Detroit Ml in 1965 where he gained employment in the automotive industry. He worked for Chrysler Lynch Rd assembly and later Ford truck. He trained and perfected the art of spray painting and would consider himself a master painter. He was most known for his work as a Driver with Smart Transportation. He grew to love the freedom and relationships he built over the road. He retired after 17yrs. of long-haul driving. In Nov. 1984 Love connected Edward and Earlean Starks who he affectionately referred to as (Shortie). They shared 37yr of marriage and two this union two daughters were born. They later joined Shephard Star M. B. Church under the pastorage of Reverend Dr. Ronald Ramsey. He was crowned Deacon under the leadership of Rev. James Robinson. His current Church Home is Pleasant Hill M.B. Church under the leadership of pastor Rev. Dr. Terry White where he held the office of Deacon. Ed and Earlean also began the venture into property ownership and acquired multiple homes until his health began to fail and they downsized. Ed was very dedicated to the Masonic Order; Hiram Lodge #1 was is associated Lodge. There he became the Worshipful Master and held the 32nd masonic degree. He held many house positions and was a Shriner as well. He enjoyed listening to all kinds of music, sports, playing cards especially BID-WISK and traveling the world. He was an avid fisherman and boat enthusiast and owned two boats. He also worked in his community as a Franklin Park Block Captain. He considered himself the Mayor of the Block. He was always there to share worldly advise and helping his neighbors and children in need. He was good for gathering the kids and even a dog or two to get ice cream from the ice cream trucks. Ed never knew a stranger and always had good piece of sage advice or something slick to say during a meeting and that's saying it lightly. He Departed this earthly realm on December 15th , 2021 with some of his children and wife by his side. He peacefully gained his wings as God called him home from Labor to Reward. He leaves to cherish his memories a loving and devoted wife Earlean S. Hill (Shortie), one brother Melvin Lewis (Lillie) Tuscaloosa, Ala. Ten Children Mack Earl Collins (Joann), Sallie Smith, Joyce Austin of Yakima, Washington, Verna Lisa Harding (Chet), Edward Hill 111, Lalita Hill (Victor), Jacqueline E. Hill, Chaunda Moody (Julian), Richard Madison, Dayna Isabelle (Squire), all of Detroit, Mi. A host of grandchildren, great grandchildren, cousins and special friends.

In Loving Memory Of: Edward Hill Jr. whose earthly journey began March 1st 1942 in Uniontown Alabama to the late Edward Hill Sr. and Della King who both preceded him in death. He confessed hope and Christ at an early age and joined Beulah Baptist... View Obituary & Service Information

The family of Mr. Edward Hill Jr. created this Life Tributes page to make it easy to share your memories.

Send flowers to the Hill family.