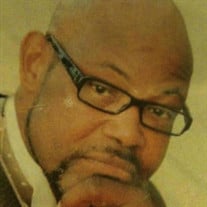 Edward Earl Drake was born on August 24,1961 to the late Edward Drake and Margaret Hughey he was the fourth of five children. Edward, affectionately known as Buckle, was given his nick name by his Aunt Carrie because of his love for the commercial buckle up for safety, and later it was shortened to Buck. Buck loved life, he could sit for hours talking and joking with his friends no one could out talk him. He was known for his humor and his happy spirit that came along with him. Buck also loved music and movies, he definitely the person to go to if you needed the name of a song, artist, or the name of a movie. Buck started his education early with pre-school at Carver School in Royal Oak Township. He continued education at Our Lady of Victory, where he was baptized at an early age, and later transferred back to Carver until he went to Oak Park High School and graduated. Buck received a football scholarship for college. On June 26,1988, Buck married Carmel Beasley, and she was there until the end hand in hand. Together they raised four wonderful children as well as their two fur babies (Sasha and Helen). Buck was a very devoted and hands on father and family man. Over the years Buck took on many jobs to provide a very happy and good home for his family until he found his love for cooking. Once he became a Chef, he was able to provide his family with their every want and need and he continued his career until his health would not allow him too. After he had to stop working, he devoted himself to his grandchildren. Buck departed his life on August 29, 2021. He leaves to laugh, talk, and enjoy his memories: his wife, Carmel Drake; his four children, Niasa Drake, Eric Drake, Brandon Greer, and Raa’Shun Greer (who preceded him in death); nine grandchildren, Kyrell, Raa’Shun, Braylen, Kimond, Peyton, Drake, Morgan, Eric Jr., Ethan (who will be born in about two weeks); his sisters, Sherry Drake and Victoria Wiley; three brothers, Terrance Boyd, (Eric Boyd and Daryl Drake, both preceded him in death); and a host of nieces and nephews, and many, many friends.

Edward Earl Drake was born on August 24,1961 to the late Edward Drake and Margaret Hughey he was the fourth of five children. Edward, affectionately known as Buckle, was given his nick name by his Aunt Carrie because of his love for the commercial... View Obituary & Service Information

The family of Mr. Edward Earl Drake created this Life Tributes page to make it easy to share your memories.

Send flowers to the Drake family.