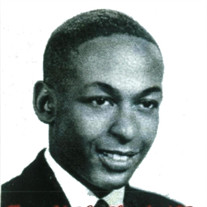 In Loving Memory Of Donald Lindell Smith was born on November 25, 1944 in Detroit, Michigan to Mr. Wilson and Callie Williams. Donald was baptized at Bethal Apostolic Church under Pastor Tommy Woods. He later attended Christ Temple Church under Elder Carl E. Holland under his tutelage received the Holy Ghost. He later joined Greater Grace Temple under Bishop David Ellis. He later moved his membership to Excellent Way Ministries where he was a deacon and completed a course for the ministry under Pastor William J. Rainey for many years. Donald was educated in the Detroit Public School system, receiving his diploma from Northwestern High School. He worked at the library and for the city. He was a medical attendant for Receiving Hospital, employed at the (DIA) Detroit Police Dept. "Headquarters" and retired from the 8th Precinct. Donald was joined in holy matrimony to Mildred Tucker, to this union three children were born Donald II, Darrell and Dionne. He remarried several times after the previous marriage. He married Deborah Winters from this marriage were two children, Alicia and Dwayne Smith. Preceding him in death: his parents Callie Freeman, Alexander Freeman Sr., Mr. Wilson, five sisters, two brothers Alexander Freeman Jr., Richard Smith, one brother-in-law Jimmie Black, one grandson D'Ryan Smith. Donald was a professional photographer and bowler. He did many weddings in the 80s - 90s for Christ Temple Church and many others. His bowling league was on the TV show Bowling For Dollars. He was an excellent ballroom dancer winning many contests. Donald enjoyed being around family and friends, and always made it a priority to buy Christmas gifts for all his grandchildren as his mother did. The Lord called him home on Sunday, April 3, 2022 after an unexpected illness. Donald leaves to cherish his memory: one sister Gloria Pickett; three sisters-in-law Ree Smith, Betty Smith-Black, Spring Thomas; three sons Donald II, Darrell, Dwayne; two daughters Dionne, Alicia; extended children Steven, Cassandra, Rosa, Rita; 32 grands, 29 great-grands, and a host of nephews, nieces, cousins and friends.

The family of Mr. Donald Lindell Smith Sr. created this Life Tributes page to make it easy to share your memories.

In Loving Memory Of
Donald Lindell Smith was born on November...