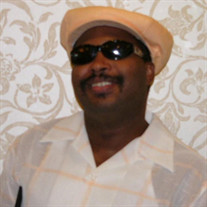 In Loving Memory Of Deandre born to Delores Collier and Steven Calloway on November 1, 1968 in Detroit, Michigan departed his worldly body on 7 February 2022. Preceding him in death is parents, Delores Calloway and Steven Calloway; grandparents Wayman and Eliza Guinn who raised him and guided him to become the great man that he was. Deandre lost his sight at the young age of seven, but it would not have a lasting effect on him achieving his goals and dreams to excel in life. He refused to allow himself to be categorized as handicap. He would walk the streets of his city, refusing to use a cane. He memorized everything, the bus route and time, the streets and the number of steps required to get him from one place to the next. He attended Cody High School, which he graduated from in 1986. He went on to get his Associates Degree from Wayne State Community College, where he was very active in the Student Council and graduated with honors. Deandre had a strong desire to learn and would go on to get his bachelor’s degree from Michigan State where he served as chairperson of the Snyder-Phillips Student Campus Life Committee, Black-Caucus representative to the Snyder-Phillips Residence Hall Association and founder and president of the Minority Affairs Council. He received a master’s degree from Northern Baptist Theological Seminary and Marygrove College. Deandre would conclude his educational endeavors in 2013 at Ecumenical Theological Seminary, where he received a Doctorate of Ministry. He also authored a book titled “From Victim To Victor”, Walking by Faith and not by Sight. He accepted Christ as a young adult and was ordained in 1993 by then Pastor, Pastor Samuel Bullock of Bethany Baptist Church. Before becoming ill, Deandre served as a minister and spiritual leader at Pure Word Missionary Baptist Church. Deandre was employed by the Social Security Administration for more than twenty years before retiring. He had a difficult time sitting idle, so at various time he took on part-time jobs served as a Chaplain at Henry Ford Hospital and as an Associate Professor at Marygrove College. He leaves to cherish his memory, an aunt, a host of cousins and friends.

In Loving Memory Of Deandre born to Delores Collier and Steven Calloway on November 1, 1968 in Detroit, Michigan departed his worldly body on 7 February 2022. Preceding him in death is parents, Delores Calloway and Steven Calloway; grandparents... View Obituary & Service Information

The family of Rev. Dr. Deandre Steven Collier created this Life Tributes page to make it easy to share your memories.

In Loving Memory Of
Deandre born to Delores Collier and Steven...

Send flowers to the Collier family.