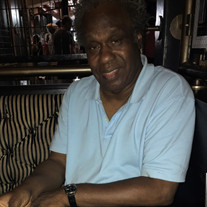 In Loving Memory Of Pastor Clenard Green, was born on July 28, 1947 in Detroit, Michigan to Willie David Green and Willie Ann Hardy. Pastor Green attended high school in Detroit, Michigan and shortly after leaving high school, he enlisted in the United States Army, where he fought in the Vietnam War and obtained an Honorable Discharge.  Pastor Green was employed with General Motors for 30 years until his retirement in 1999.  He was joined in holy matrimony with Jacqueline Reynolds on March 18, 1975.   Pastor Green accepted the Lord in 1978, later becoming an ordained pastor. He was passionate about prayer,  studying his Bible, and teaching the word of God. Pastor Green was called to lead the street and prison ministry in Detroit and later became the lead pastor of True Growth Ministry. Pastor Green loved to watch basketball, and was an avid movie goer. He enjoyed traveling to new places, and decorating his home with his favorite color, red. He was truly a family man and would go above and beyond to support his family. Family gatherings were events that he looked forward to. He loved to sit and chat with friends and family and always had words of wisdom and encouragement to share.  Pastor Green departed this life early in the morning on Tuesday, September 21, 2021.  He was preceded in death by: Willie David Green (father), Willie Ann Green (mother), and Johnny Green (brother). He leaves to cherish his memories: wife, Jacqueline Green; children: Dorsey Knight, David Green (Villetta), Corrie Smith, and LaToya Williams (Eugene); siblings, Leonard Green (Claudette), and Christine Green; grandchildren: Antoine, Erin, Kaela, David II, James Jr., Jamari, Bryce and Skylar; great-grandchild, Kevin Jr.; and a host of nephews, nieces, aunts, uncles, cousins and friends.

The family of Pastor Clenard Green created this Life Tributes page to make it easy to share your memories.

In Loving Memory Of
Pastor Clenard Green, was born on July 28,...

Send flowers to the Green family.