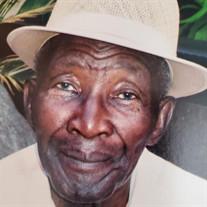 In Loving Memory Of Charlie Frank Swilley was born on November 9, 1934, in Hazlehurst Mississippi to loving parents Leroy and Pearlie Swilley, both preceded him in death. Charlie was a student in the St. Peter School system. As a teenager, he worked at the Sawmill, laid asphalt, drove trucks hauling lumber and worked on a farm. During this time, he was paid only three to six dollars a day. At the age of 18, Charlie left Mississippi and relocated to Detroit, Michigan so that he could earn a better living for himself. On September 9, 1953, he gained employment at Ford Motor Company in Dearborn, Michigan. Earning $60 to $100 a week as a spot welder. Charlie also had a second job as a taxicab driver for the city of Detroit. Charlie soon worked his way up to a truck driver at Ford gaining higher income and earning the nickname "Charlie Fox". After 42 years and 7 months Charlie decided to retire from Ford on July 1, 1996. Charlie met and fell in love with a young lady named Sarah Mason after a year they were united in holy matrimony on November 16, 1956, and to this union five children were born: Cherry who preceded him in death, Frank, Mac, Carl and Angela. Charlie’s loving wife Sarah departed this life on July 1, 2006. Charlie married his special friend Luella Campbell-Meadows on December 10, 2012. They traveled everywhere together from Michigan to South Carolina to Mississippi and enjoyed each moment together. Charlie was a faithful Christian serving as a Deacon, Sunday School Teacher, choir member, and prayer warrior. Words will never express the family man, hard worker and provider that he was for his family, all who have come to know him could not help but love him. Charlie leaves to cherish his memory, wife Luella, children, Frank, Mac, Carl (Pearl) and Angela (Michael), 14 grandchildren, 20 great-grandchildren, 3 great-great-grandchildren, 15 in-laws, and a host of nieces, nephews, and friends.

In Loving Memory Of Charlie Frank Swilley was born on November 9, 1934, in Hazlehurst Mississippi to loving parents Leroy and Pearlie Swilley, both preceded him in death. Charlie was a student in the St. Peter School system. As a teenager,... View Obituary & Service Information

The family of Mr. Charlie Frank Swilley created this Life Tributes page to make it easy to share your memories.

In Loving Memory Of
Charlie Frank Swilley was born on November...

Send flowers to the Swilley family.