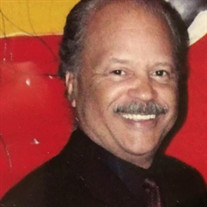 Charles Levi Wells III, was born on December 7, 1944, in Detroit, MI to Charles Wells II and Veralee Wells. Charles had a passion for sports, and lettered in football at McKenzie High School, before graduating in 1963. After high school, Charles attended Texas Southern University before enrolling in the United States Army in 1966. After attending Officer’s Training School, he was honorably discharged from the Army in 1969, and enrolled in Western Michigan University (WMU). While at WMU, he pledged Alpha Phi Alpha Fraternity Inc. before earning a Bachelor of Science degree in 1972. Then in 1979, he earned his Juris Doctorate degree from Wayne State University In 1975, Charles married Adrienne Saunders. To this union, Lauren and Charles IV were born. While their marriage wouldn’t last forever, Charles and Adrienne have remained very good friends. In 1984, Charles and his family moved to Flint, MI where he entered into a partnership with former Detroit Lion, Mel Farr, and Car Dealership Owner, Al Bennett, to form the 7-Up Bottling Company. This venture was the first Black-Owned Bottling Company in America, and for this the trio received recognition from Black Enterprise, Civil Rights Activist Jesse Jackson, and countless others. In 1988, Charles and his partners sold the bottling company, and he joined the law firm, Dupuis & Ryden, where he served as the Director of Bankruptcy and Business Reorganization Services. In 1994, Charles relocated back to his birthplace of Detroit, MI to accept an employment offer from the Detroit Public Schools (DPS) as their General Counsel. He was later promoted to Executive Director of the Department of Employee Relations. In 2001, Charles married Carol Mack and their blended family now included two additional adult children – Richard and Ryan Mack. Living in their Southfield home, Chuck and Carol loved to entertain family and friends; they were well known for hosting an annual fourth of July party and an annual Christmas party. He and Carol were also known for hosting beautiful dinner parties where Chuck loved to cook and enjoy gourmet meals. Chuck was an active Carrafella, the husband’s group of the Detroit Chapter of Carrousels. He and Carol had fun traveling to the annual Carrousel’s conventions held in various cities. In 2017, Chuck joined Carol to regularly attend St. David’s Episcopal Church in Southfield where under the guidance of Father Chris Yaw he was led to Christ. While they traveled a lot, the highlight of their travels was their trip to Greece and Italy with a group of close friends. Together and often surrounded by friends and family, Carol and Chuck enjoyed a very happy and full life for over 20 years. During his lifetime, Charles was a sports fanatic, an avid reader and a historian who loved debating any topic, especially sports, history and politics. In 2004, Charles fulfilled his professional dream of owning his own practice as a Bankruptcy Trustee. It was during this time that he was diagnosed with Parkinson’s and later was a two-time cancer survivor. It was in January 2019 that he was forced to retire due to his declining health. On Sunday, August 8, 2021, Charles Levi Wells III lost his fight to Parkinson’s and was called home at the age of 76. He was preceded in death by his father, Charles Levi Wells, II. He is survived by his mother Veralee Wells; wife Carol Wells; brothers, Ronald (Michele) and Jeffrey (Karen) Wells; children Lauren and Charles IV (Erriane); step-children Richard and Ryan Mack; grandchildren Jeremiah Mack, Charles V and Prestyn Wells; and a host of nieces, a great nephew, aunts, uncles, cousins, and friends. In lieu of flowers, The Wells Family would like for you to make a donation to The Michigan Parkinson Foundation. www.parkinsonsmi.org . Their address is 30400 Telegraph Rd. Suite 150, Bingham Farms, MI 48025. The family has requested a private memorial service, others may access the service via Zoom on September 10, 2021 from 11:00 a.m. - 12:30 p.m. www.zoom.com - Meeting ID: 925 257 3320 & Password: 16200.

Charles Levi Wells III, was born on December 7, 1944, in Detroit, MI to Charles Wells II and Veralee Wells. Charles had a passion for sports, and lettered in football at McKenzie High School, before graduating in 1963. After high school, Charles... View Obituary & Service Information

The family of Mr. Charles Levi Wells, III created this Life Tributes page to make it easy to share your memories.