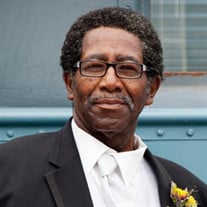 In Loving Memory Of Charles Edward Marion (Bo, Chuck) was born on December 13, 1947 in Wilcox County, Alabama to the late Annie Ruth McQuiter. He was the first of seven siblings born to his mother.  Charles was inducted into the Army in October of 1967. He was assigned to C Company, 704th Maintenance Battalion, 4th Infantry Division. He served two tours in the Vietnam War and was honorably discharged in August of 1969. During his service he was awarded the National Defense Service Medal, the Republic of Vietnam Campaign Medal, the Vietnam Service Medal and two Overseas Service Bars.  Charles moved to Detroit in 1972 and accepted a job with Ford Motor Co. He worked with AK Steel (formerly Rouge Steel) in numerous positions including welder and crane operator. He was a member of the UAW Local 600. His health forced him to retire after 42 years of faithful and dutiful labor. In retirement, Charles enjoyed spending time with his grandchildren. He loved to tease those around him with his dry but still warm sense of humor. He was fond of telling stories and always gave sage advice to his children. He was passionate for his cars,  particularly his 1978 Trans Am “Firebird,” and found joy in mechanics and carpentry whenever he could practice. Charles was a private, reserved man but known for his work ethic, his kind eyes, warm heart and his generosity. He could fix “anything” and would do it expecting nothing in return. He was passionate about his family, his friends and his ability to serve and provide for those around him. He was proud of his beautiful grandchildren who he loved to spend time with. His life was spent in dutiful, honorable service and he is irreplaceable and unforgettable. He was one of the hardest and most diligent working men in Detroit. Charles Marion leaves to cherish his memory: his caring sisters, Alma Eady, Henrietta Williams, Bettye McQuiter and brothers, Dorsey McQuiter, Larry D. McQuiter and Asmy James McQuiter who preceded him in death; his proud children, Carolyn (Kent Quinnie), Tonya, Christopher (Katherine Marion), Kenneth Marion, Anthony Conley, Jamar Morgan; his adoring grandchildren and a host of nieces, nephews, family and friends who will dearly miss his presence.

In Loving Memory Of Charles Edward Marion (Bo, Chuck) was born on December 13, 1947 in Wilcox County, Alabama to the late Annie Ruth McQuiter. He was the first of seven siblings born to his mother.  Charles was inducted into the Army in October... View Obituary & Service Information

The family of Mr. Charles Edward Marion created this Life Tributes page to make it easy to share your memories.

Send flowers to the Marion family.