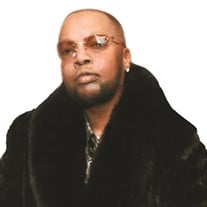 Byron Ca’Juan Fambro was born on May 18, 1980, in Detroit, MI to the late Andre Fambro and Sharon (Jordan) Fambro. He was the 3rd child of 5 sons. They were raised on the east side of Detroit in a Christian home, and the family attended Mount Calvary Missionary Baptist Church. At the age of 12, Byron accepted Jesus Christ, as his personal Lord and Savior and was baptized.  As a youth, he loved to play basketball.  He played in the church basketball league and on the JV Squad for The Denby Tars. He was educated at Dorothy Fischer Middle School, Edwin Denby High School, and later transferred to Jared W. Finney High School where he graduated from with his high school diploma, in 1999.  After completing high school, he enrolled into Focus Hope’s Electrical Apprentice Program, and went on to attend Alabama A&M University, in Huntsville, Al, where he earned an Associate Degree in Business.  ​Shortly after coming home from school, he rekindled his childhood friendship with his one and only “True Love,” Tanisha McLaughlin.  They fell madly in love, and on January 18, 2008, they were married, and she became Mrs. Fambro.  They raised 5 beautiful children and a grandchild.  Byron was an entrepreneur, who owned several properties, and was a great provider for his family.  He and Tanisha lived an extravagant lifestyle and they loved the finer things in it.  Byron was flashy, loved to dress in designer clothes and shoes, wear his Cartier’s and jewelry, and drive the flyest cars which earned him the nickname, “Flossy.”  He also developed a passion for old school cars, which led him to purchase a 1974 Ford XL, that he restored, customer designed and flaunted with pride. As a result of his passion for cars, he participated in The Woodward Dream Cruise, The Gratiot Cruise, and other known cruises and car shows, where he won countless trophies and prizes.   ​Byron was a very genuine person and had a heart of gold.  If he loved you, he loved you.  If he didn’t, well you know, it was what it was.  He was full of charisma, had “the gift of gab,” and considered to be “the life of the party.” His silly, clever nature always brought light and laughter to whatever space he held. If you ever took the time to sit down and talk with him, you would find he was very persuasive in his conversation.   Byron was a loving man, who was a giver, always made sure everyone was taken care of, and would help whenever needed.  He was all about family, and was a devoted husband, father, grandfather, son, brother, uncle, and friend who overcame a lot of obstacles throughout his entire life.  On January 18, 2022, he and Tanisha’s wedding anniversary, he passed away at the young age of 41.  His legacy and memories will live on, and he will be in our hearts forever.  Preceding him in death was his father, Andre Fambro; his grandparents, Alton and Mary Fambro (father), grandmother, Sybil Jordan (mother), and mother-in-law, Laverne McLaughlin.   He leaves to cherish his loving wife, Tanisha Fambro; his 5 beautiful children, DaVeonta, Den-Ma’rea, Dalonta, Chimere, and Amani; his beloved granddaughter, Raiyn; his loving parents, Sharon and Edward Smith; his 4 brothers, Robert La’Juan Jordan (Monica), Andre Fambro (Shantel), Blair Fambro (Jasmine), and Devontte’ Tyrico; his sisters-in-law, LaToya and LaShanda McLaughlin, his BFF and cousins, Cerrome Oatman and Kauron Oatman; and a host of aunts, uncles, cousins, nieces, nephews, other relatives, and friends.

Byron Ca&#8217;Juan Fambro was born on May 18, 1980, in Detroit, MI to the late Andre Fambro and Sharon (Jordan) Fambro. He was the 3rd child of 5 sons. They were raised on the east side of Detroit in a Christian home, and the family attended... View Obituary & Service Information

The family of Mr. Byron Ca'Juan Fambro created this Life Tributes page to make it easy to share your memories.

Send flowers to the Fambro family.