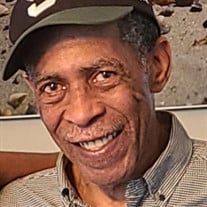 In Loving Memory Of Bobby Lee Drake was born on February 4, 1946 in Pensacola, Florida to Clifton and Bernice Drake; the second oldest of eight children. Bobby graduated from Washington Senior High School in Pensacola, where he played drums in the band. After graduation, he joined the United States Air Force during the Vietnam era and served four years. Bobby moved to Detroit, Michigan in 1971. He worked briefly for Chrysler before joining General Motors, which he retired from after 32 years. He met his wife, Helen, in Pensacola when they were neighbors in their youth. After she moved to Detroit, they married after three years of dating and celebrated their 49th wedding anniversary this year. To this union, two children were born: a son, Darnell, and a daughter, Shanise. He was a constant source of love and support for them. Bobby rededicated his life to serving God at Scott Memorial United Methodist Church and served wherever he was needed. Upon hearing a visitor complain about how small the old sanctuary was, he replied “it’s okay, God made it in.” Bobby loved kids and they loved him; he looked forward to joking with them each Sunday, as well as with his fellow church members. He was preceded in death by his parents and three siblings. He leaves to cherish his memory: his wife, Helen Drake; son, Darnell Drake; daughter, Shanise Drake; grandson, Donovan Drake; sisters: Lucrisia Drake, Betty (Charles) Walker, Angela Drake, Carla Drake; brother-in-law, Claude Patton; sister-in-law, Dorothy Cooke; along with a host of nieces and nephews that he loved deeply and who were each “his favorite.”

In Loving Memory Of Bobby Lee Drake was born on February 4, 1946 in Pensacola, Florida to Clifton and Bernice Drake; the second oldest of eight children. Bobby graduated from Washington Senior High School in Pensacola, where he played drums... View Obituary & Service Information

The family of Mr. Bobby L. Drake created this Life Tributes page to make it easy to share your memories.

Send flowers to the Drake family.