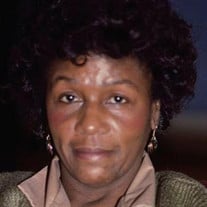 In Loving Memory Of Betty Joan Hill was born on June 4, 1934, to Alfred Zachery and Irene Zachery (Waters) in Kingston, Georgia and was the second youngest of 8 children. Betty (also known as Woot) grew up in Kingston and was the first Black student from Kingston to graduate from Summer Hill High School in Cartersville, Georgia. Betty met the love of her life, Robert Lee Hill and they were married on June 20, 1954. From this union four children were born. Their first son was born in Atlanta and later, they moved to Detroit, Michigan where one daughter and a set of twins were born. Betty was a stay-at- home Mom who supported and encouraged her children. Betty accepted Christ at an early age while in Georgia and later attended Gracious Savior Lutheran Church in Detroit. Betty enjoyed fishing, bingo, playing cards, listening to music, watching baseball and basketball. She was particularly excited to see when one of her children or grandchildren were involved in different events. Betty had a special bond to her family. You knew when one of her sisters was in the house, together they would raise the roof with laughter and excitement. Without doubt, when the Golden Girls got together the love was felt by everyone. This made the annual Family Reunion an incredibly special event for the Family. During her last two years, Betty became a Great-grandmother, and this brought a new joy to her life. Betty was called home by the Lord on August 10, 2021. She was preceded in death by her parents Albert and Irene Zachery and 8 siblings Albert Zachery, Ellen Latterner, Fred Zachery, Mable Fletcher, Emma Noble, Christine Wilson, Frank Zachery, Lucile Zachery and Grandson Robert L. Hill, III. Betty leaves to cherish her memories: her loving and devoted husband of 67 years Robert Lee Hill, Sr.; 4 children Robert L. Hill, Jr. (Wendy Riley-Hill), Alecia Hill-Williams (Arthur Williams III), Kevin B. Hill, Kimberly Hines (Paul Hines); grandchildren Jessica, Ryan, Kawan, Jalynn, Brittany, Arthur, Jasmine, Kevin Jr., Darius, Danielle (Mia), Paul, Brandon; and one great-grandchild Jordyn, whom she affectionately called “that Little Girl.” That Little Girl made Betty smile. Brothers-in-law William Hill, Walter Hill, Weymon Hill; sister-in-law Virginia Zachery and a host of nieces, nephews, cousins and a special niece Predetha Zachery.

In Loving Memory Of Betty Joan Hill was born on June 4, 1934, to Alfred Zachery and Irene Zachery (Waters) in Kingston, Georgia and was the second youngest of 8 children. Betty (also known as Woot) grew up in Kingston and was the first Black... View Obituary & Service Information

The family of Mrs Betty Joan Hill created this Life Tributes page to make it easy to share your memories.

Send flowers to the Hill family.