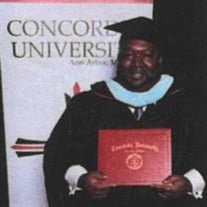 Armand Osband Horst, 46, was born on August 2, 1975 in Southfield, MI to Walter and Brenetta Horst. He grew up in Detroit and neighboring cities around Detroit. He had one brother, Ramone. Armand attended Detroit Public Schools and graduated from Cass Technical High School with a major in electronics. While in high school, “Mony” matured and earned accolades and participated in football, wrestling, symphonic orchestra band, jazz band, marching band, male chorus, concert choir, and in the electronic club. Armand went to Olivet College and then to Delaware State University majoring in electronics while participating in their marching band and taking private lessons on Trombone from Dr. Donald Byrd (Jazz legend for Detroit, MI). Armand was employed with different public school systems here in the Detroit area and made a lasting impression on many students and helped his students to receive scholarships to college and major in whatever they were most interested in. Armand was most interested in all the things he did but he was very proud to meet with Dr. Donald Byrd, the compliments “Byrd” gave him and how many took it took to the heart and learned and practice the way he told him too. He was thankful that God let him meet and learn from a great musical jazz generous as Dr. Donald Bryd from “The D” and people knew that. He learned many life lessons from Dr. Byrd also. Armand departed this life on Thursday, September 2, 2021. Uncles Boisy and Bernard Dukes preceded him in death. Armand leaves to celebrate his life and cherish his loving memory: his mother Brenetta Horst; his father Walter Horst; his brother Ramone; and his honorary brothers George Hill and family, Gerard Furderburg and family; cousins David, Deborah and Charles Felton (who were raised more like brothers and sister than cousins); and several men that many called "Uncle" Willie MacAlister, Dr. Robert Crisp, Eric Huffman, John Cooper, Uncle Joe, Auntie Pat, Aunt Louise White; and our family of Chicago, Illinois, and a host of nephews, nieces, aunts, cousins and friends.

Armand Osband Horst, 46, was born on August 2, 1975 in Southfield, MI to Walter and Brenetta Horst. He grew up in Detroit and neighboring cities around Detroit. He had one brother, Ramone. Armand attended Detroit Public Schools and graduated... View Obituary & Service Information

The family of Mr. Armand Osband Horst created this Life Tributes page to make it easy to share your memories.

Send flowers to the Horst family.