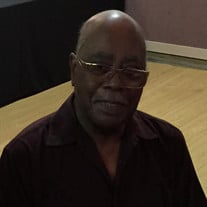 In Loving Memory of Alphonso Tanks, affectionately known as ‘Ted’ or 'granddaddy’, was born on July 8, 1929, in Killarney, W VA to the late Hilda and Ernest Tanks; the second of eleven children. Ted enjoyed a supportive and loving family. The stories he told of life on the “Coal Camp” were very engaging and detailed. ‘We had a good life. Even though our family was large in numbers we never wanted for anything’ he would say. Ted really enjoyed his childhood and loved his family dearly. He attended Byrd-Prillerman High School, where he played football, saxophone, and enjoyed reading literature and poetry; passions he maintained throughout the remainder of his life. His graduation from high school was in 1948. Post-graduation, he endured a successful coal mining carrier. Ted met and married the love of his life, Audrey Pulliam, in 1951 relocated to Detroit, Michigan in 1953. Together, they raised ‘four beautiful children’; were the proud grandparents of seven, great-grandparents of 23 and great great-grandparents of seven. He was a fierce protector, and provider for his family. This devoted husband, served as the primary caregiver for his wife, Audrey, during a long illness. His unselfish care and attention brought comfort, appreciation, admiration, gratitude and joy to her and the entire family. He was the “fun” parent who played games (“throw and die”) with his children and on many occasions, took them fishing, near the Detroit River all night long. He created imaginary characters (“bloody bucket”) that lived generations yet remain invisible; and locations that never existed (“no castle”). He told his children and grandchildren how proud he was of them and reminded them that they were “flesh of my flesh and bone of my bone.” Ted Tanks prayed for his family “every day and night.” A conscientious, diligent, and dependable worker, he retired from New Haven Foundry, a manufacturing plant in New Haven, Michigan after more than 30 years. During his first year of retirement, he read the Bible from cover to cover, along with other books he never had a chance to read during his working years. He then decided he had more to offer the community and began transporting children enrolled in the latchkey program at Babes in the Woods Child Care Center. He remained a part of the Babes in the Woods family for more than 15 years; until the dreaded covid-19 pandemic caused the center to close. He continuously verbalized and demonstrated his love for God through his actions. He was a firm believer in Jesus Christ as his personal Savior and remained an avid reader of the Holy Bible. Ted was a faithful tither to Beulah Baptist Church as well as other organizations dedicated to demonstrating discipleship through service to others. He was confident of his sonship and personal relationship with God. As a Christian, the last words uttered before he left this earth were: ‘I want to Thank God for my life and for my family.’ Ted will always be remembered as a man of wisdom and impartiality. He maintained unbiased, fair assessments of people, rendering sound advice and solid judgment in decision making. Although he was not formally educated past high school, he was one of the most intelligent people anyone could meet and could discuss Any topic in detail; from world events to sports, he was on top of it. This man read the newspaper from cover to cover every day, yes, even the thick Sunday newspaper. He maintained a sharp mind, and a toned, muscular physique throughout his life. His healthcare providers described him as ‘amazing,’ based on his cognitive and physical capabilities and could not believe that he was 92 years old. Ted was well respected by people of all ages, including his neighbors, coworkers, peers, and friends. He was the loved and honored patriarch of his family. What a Great Man…What a legacy!!! He leaves to cherish his memory and continue his legacy, four children: Glenna Jones, Alphonso J. Tanks (Kathy), Ava Tanks Farr, and Cornelia Tanks-McGowan (Dewitt Jr.). Grandchildren: Kimberly (Deshawn), Marlon (LaTonya), Airrion (Heather), Khari, Tene, and Daniel; his great grandchildren, and great-great grandchildren. Four siblings: Jerry Tanks and Ernestine Dozier from Beckley, W VA, Leigh Penny from Silver Spring, MD, and Tyrone Tanks (Victoria) from Highland Springs, Virginia; a host of bonus grand/great grandchildren, nieces, nephews, and cousins’ friends. Preceding him in death are his wife of 51 years: Audrey Tanks. Parents: Hilda and Ernest Tanks. Siblings: Ernest Tanks, Jr, Leon Tanks, Harold Tanks, Larry Tanks, James Tanks and Janet Tanks Ross. Son-In Law: Kenneth Jones. Grandson: Andre Jones.

In Loving Memory of Alphonso Tanks, affectionately known as &#8216;Ted&#8217; or 'granddaddy&#8217;, was born on July 8, 1929, in Killarney, W VA to the late Hilda and Ernest Tanks; the second of eleven children. Ted enjoyed a supportive and... View Obituary & Service Information

The family of Mr. Alphonso "Ted" Tanks created this Life Tributes page to make it easy to share your memories.

In Loving Memory of
Alphonso Tanks, affectionately known as ‘Ted’...

Send flowers to the Tanks family.