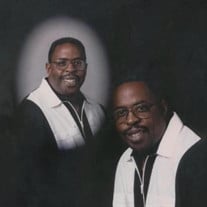 In Loving Memory Of Alonzo Jackson, Jr. was born on January 17, 1945 to the late Alonzo Jackson, Sr. and Sarah A. Williams Jackson in Birmingham, Alabama. He accepted Jesus Christ at an early age and joined First Baptist Church Zion City under the pastorship of Rev. D. F. Childs. In the early 70s, he moved to Detroit, Michigan and joined Mt. Zion Missionary Baptist Church under Dr. Sterling Jones. Throughout the years he continued to attend First Baptist Church Zion City whenever he visited Birmingham. Alonzo attended Milton Sears Elementary School and graduated with honors from Hooper City High School in 1963 in Birmingham, Alabama. He looked forward to the Hooper City Class Reunions. He acquired an Associate Degree in Applied Science from Baker College. He was employed over seven years with Anderson Electric in Birmingham. In 1970, Alonzo moved to Detroit, Michigan where he gained employment with Ford Motor Company in 1970. He was family oriented, and Alonzo and his cousin Barbara founded The Williams 5 Family Reunion. The first reunion was held in Birmingham. He is National President and has never missed a reunion. Nobbie was smart, ambitious, witty, kindhearted and a joy to be around. His passion for sports led him to coach the Local 600 Baseball Team in Detroit. He had an array of trophies for the team achievements. Nobbie transitioned from this life on Tuesday, February 8, 2022 at 9:36 pm. to his new heavenly home. He is preceded in death by his parents, Alonzo Jackson, Sr. and Sarah Jackson; brother, Robert Jackson; sister, Ola Jean Jackson. He leaves to mourn and cherish his memories one son, Alonzo Crayton, a devoted best friend who was like a brother, Craig Warbington (Karla), three sisters, and a host of loving family and friends.

The family of Mr. Alonzo Jackson Jr. created this Life Tributes page to make it easy to share your memories.

In Loving Memory Of
Alonzo Jackson, Jr. was born on January 17,...

Send flowers to the Jackson family.