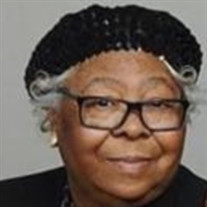 In Loving Memory Of: Alma Lee Darby was born on March 3, 1934, in Kelton, South Carolina. She received her education in the Union County, South Carolina School System, attending Ebenezer and Howell Schools in Kelton, South Carolina, and Sims High School in Union, South Carolina. In later years, she attended Wayne County Community College in Detroit to enhance her knowledge of computers. In 1960, Alma migrated from South Carolina to Detroit, Michigan, with her husband, Willie Darby, and their only child, Carol. Willie Darby preceded her in death in 1969. After migrating to Detroit, she was employed at various jobs, including the State of Michigan and the VA Hospital in Allen Park. In 1972, she obtained a job with the federal government working with the General Service Administration (GSA), where she served for the next 25 years until retirement in 1997. She was employed as a Work Inspector in charge of leased facilities. Her territory included the U.S. District Courts, as well as the McNamara Federal Building, the IRS Building, and several leased government facilities throughout the Eastern District of Michigan. She enjoyed her duties because it allowed her to visit various cities and locations in Michigan. If you needed driving directions, she was the GPS before its time. Her greatest joy after retirement was being the caregiver to her great-granddaughter, Ravyn. She also enjoyed travel. At least once a year, she could be found in South Carolina visiting friends and relatives, on the Strip in Las Vegas, or on a cruise ship in the middle of any ocean. Alma was baptized at an early age at the New Emmanuel Chapel Baptist Church in Kelton, South Carolina. After her marriage, she became a member of Bethany Baptist Church in Jonesville, South Carolina. After moving to Detroit, she became an active member of Free Gospel Church under the leadership of Pastor Johnny Peake, where she served as a church mother and was later ordained a minister. At the time of her transition, she was a faithful member of Calvery United Methodist Church under the leadership of Pastor Will Council, where she served as a lay speaker. Alma was normally a somewhat quiet, reserved individual; however, when she talked about God and the "Word," there was a "fire way deep down in her soul." On Wednesday, November 10, 2021, at 5:38 p.m., Alma Darby said "yes" to the Will of God. She was preceded in death by her parents, Almazine Porter and James Lipsey; two brothers, Willie Lipsey and Anthony Durant "Randy" Lipsey; and two sisters, Deborah Lipsey and Allene Smith. She leaves to cherish her memory: her daughter, Carol McGuire; two grandchildren, Danyielle (Raphael) Nelson and Camille McGuire; one great-granddaughter, Ravyn Danyielle; and five brothers, Willie Porter, James Herbert (Fannetta) Lipsey, Ralph (Betty) Lipsey, Albert (Anne) Lipsey, and Manning Lee (Tammy) Lipsey, and a host of nieces, nephews, relatives and friends.

The family of Mrs. Alma Lee Darby created this Life Tributes page to make it easy to share your memories.

Send flowers to the Darby family.