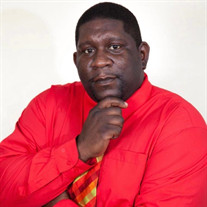 In Loving Memory Of Aaron Lester Vaughn Graves was born on April 14, 1975 to parents Jackie (father) who preceded him in death and Rosetta (mother). He has four sisters Charlotte, Nicole (Henry), Carmen and Justine also three brothers Michael, John and Jackie Jr. Aaron was born and raised in the city of Detroit where he attended Detroit Public Schools. In July 2004, Aaron and Evette Mines welcomed their son Aaron Jr. In 2008, Aaron continued his education by attending Kaplan Career Institute. He excelled and earned several certificcates for making the Dean's List. He graduated and worked as a medical administrator. Aaron also worked as a club/bar Bouncer for many years. Known to many as G-Note, he loved hanging out with friends and family playing cards, dominoes and Bingo. He also enjoyed cooking, traveling, singing, church and so much more. He had an infectious laugh and great personlity. Aaron will be extremely missed. Aaron leaves to cherish his memory his son Aaron Jr., his mother and seven siblings, four stepsons Gerald, Gerale, Jacob and Jamesiah and their mother Robin Bryant. An extended family Evette, Antonio, Latresa, and Alexis and a host of nieces, nephews, aunts, uncles, cousins and friends.

The family of Mr. Aaron Lester Vaughn Graves created this Life Tributes page to make it easy to share your memories.

In Loving Memory Of
Aaron Lester Vaughn Graves was born on April...

Send flowers to the Graves family.